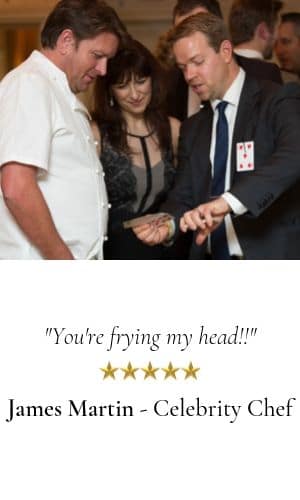 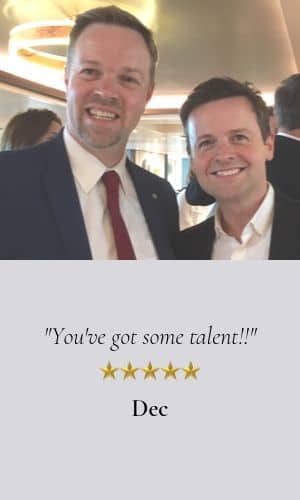 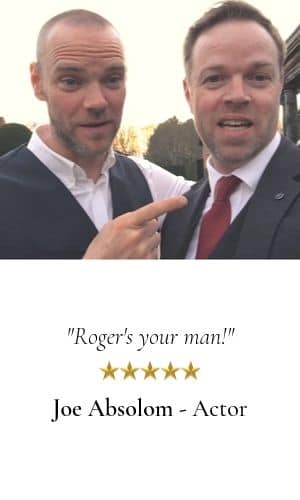 If you are looking for the best magician in Hampshire, don’t take my word for it see what everyone else has to say!

“Amazing Entertainer, I don’t know how he does it!” Alan Titchmarsh

Available to hire across London and the home counties
Reviews on Qype – www.qype.co.uk

I hired Roger to entertain guests at my 50th birthday party in May and my friends and family are still talking about him! His magic tricks were amazing and he kept all the guests, including the teenagers, enthralled and astonished. I would highly recommend him.

Roger attended my wedding at Parley Manor in May 2011.

He kept our guests entertained throughout our photos and the wedding breakfast. Everyone was amazed, and he drew some large crowds!

He had loads of tricks and the kids also loved his balloons, he is multi-talented!

I was very impressed and can’t for the life of me think how some of those tricks are done. He was an excellent addition to our wedding and I would recommend him to anyone.

When we arranged our daughters wedding (7th May 2011) we had 2 hrs to fill in order to keep our guests (of all ages) entertained. We booked Roger to assist. Well, he captured everyone’s attention. Roger moved unobtrusively between the guests and showed some tricks, leaving them intrigued and perplexed. Wherever he was in the room I could here sounds of amazement and laughter. We are planning a corporate event in later in the year and our first thought was to ask Roger again to assist.

This was the second time we had hired Roger for a function of ours, the first being our daughter’s 18th birthday. We just loved him, we didn’t stop talking about him and his amazing tricks so when Pete and I got married we immediately knew we wanted him to entertain our guests at our wedding.
His close up magic is incredible, you see stuff on TV and you just think oh its camera tricks etc etc but when he does it right in front of your very eyes you just can’t believe how he does it! He is such a lovely man too, not loud and intrusive , you just warm to him straight away and everyone loves him, young and old. We are still trying to work out how his tricks are done, his sleight of hand must be the very best we have ever seen.
Only problem is we now need an excuse to book him again!!
Would recommend to anyone without hesitation, he is magic!!

We used Roger to provide entertainment around the tables during our Department Christmas Party. Our event was held on the day of the very heavy snow and I was concerned that Roger might not be able to get to us. However, despite grim road conditions, he was professional and didn’t let us down.

Everyone was amazed by his magic and thoroughly enjoyed watching his tricks (and trying to work out how he did it).

I would have no hesitation in booking him again if we had the requirement at another function and would highly recommend him to anyone looking for a magician.

From the very beginning, Roger was professional and his magic was fantastic! We arranged for Roger to appear at our Staff party in January in order to amaze our staff and their partners- and what amazement!!

Simply great! His tricks were thoroughly entertaining, plenty of tricks up his sleeve (excuse the pun!) and every member of staff were hanging on his every word and action, baffled at the impossible magic they’d just seen!

Absolutely great- and I’d have no hesitation in recommending him to anyone, or in booking him for another function!